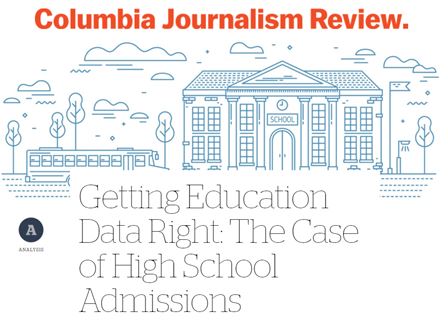 “But the tendency to exaggerate the selectivity of certain schools is ubiquitous in media, ensnaring not just the Times but also The New York Post and, to a lesser degree, The Wall Street Journal, The Philadelphia Inquirer, The Washington Post, and The Times-Picayune.

The failure to get the admissions data right constitutes a significant reporting problem. The city’s screened high schools are nowhere nearly as selective as the press has claimed, part of a wider problem of journalists placing unqualified faith in data issued by government agencies, think tanks, and intergovernmental organizations. The result often amounts to a dramatic story but one that can be quite misleading.”